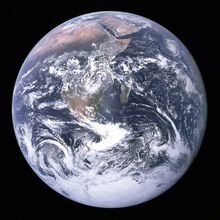 Earth, is the only planet in its solar system, whose surface has liquid water, covering over 70% of the surface and dividing it into five oceans and seven continents. There is a relatively thick atmosphere composed of 76% nitrogen, 21% oxygen, 1% argon, plus traces of other gases including carbon dioxide and water.

The interior of Earth is, like the other terrestrial planets, divided into an outer silicaceous solid crust, with a highly viscous mantle, an outer core that is less viscous than the mantle, and a solid inner nickel-iron core. The planet is big enough to have the core differentiated into an liquid outer core, which gives rise to a weak magnetic field due to the convection of its electrically conductive material, and a solid inner core. The inner core of Earth was recently discovered to rotate slightly faster than the rest of the planet, completing one additional rotation every 600 years. It is not known exactly why this occurs, but it is thought to be a result of the circulation of the liquid outer core and interaction with Earth's magnetic field.

Earth is unusual in its solar system in having a terrestrial planet-like Moon that is about 1/4 of Earth's diameter, usually called simply "the Moon," although natural satellites orbiting other planets are also called "moons." The name "Luna" is sometimes used for Earth's moon instead. By coincidence, the Moon is just far enough away to have, when seen from the Earth, the same apparent angular size as the Sun. This allows a total eclipse to occur on Earth. The origin of the Moon is presently unknown, but one popular theory has it that it was formed from the collision of a Mars-sized protoplanet into the early Earth. This theory explains (among other things) the moon's lack of iron and volatile elements.

Earth is the only known place in its solar system that supports life, notably intelligent life including humans and to a lesser extent apes, dolphins, and maybe a few others.

Retrieved from "https://omegaseries.fandom.com/wiki/Earth?oldid=9704"
Community content is available under CC-BY-SA unless otherwise noted.